The Secret To Writing Click-Worthy Headlines

If you’re a writer like me, your heart’s deepest desire is to capture readers. You want infatuation. You want obsession! But this doesn’t start with handing your reader a bouquet of roses.

Surely you’ve already noticed the other suitors battling to attract attention with headlines. They flirt with you in your email inbox, Twitter feed, local news website, and blog aggregator. But it’s not like high school flirting, when (if you were lucky) maybe a handful of youngsters goofed off to get your attention. Now, you have hundreds, thousands, of headlines, flirting with you everywhere you look.

The problem: too many headlines

Content overload is becoming the new norm. According to this infographic, in a single day:

That’s why creating exceptional, eye-catching headlines is so dang important.

The headlines that get all the attention

I love to read and learn, so I’m the ideal candidate to get romanced by headlines. What kinds of headlines do I fall for? Headlines that are witty and clever. Blunt. Ones that make promises, dangle tantalizing offers, and hint that they know something I don’t.

I fall for these every time.

Headlines have to flirt to capture your attention. If they’re not memorable, they’ll be quickly forgotten.

Just like people, headlines come in a variety of shapes, sizes, and personalities. Not everyone’s attracted to the same type of person. What appeals to one person won’t always appeal to another. That’s why when it comes to headlines, there’s a certain amount of subjectivity. You can break the rules.

BUT there ARE certain types of personalities that rock the flirting game. To understand how to write the kind of headlines that turn heads, take a look at the techniques the most successful headlines are using below - and some examples.

Be totally honest about what you bring to the table.

In relationships, there's something attractive about total, complete candor. Not only does authenticity and clarity build trust, but it perks your interest because you know exactly what you're getting.

In a study by Conductor published on Moz, researchers found that being specific and straightforward is very effective in headline scripting. They tested three aspects of headlines:

The study found that the headlines that resonated most with readers were clear and understated, including the following elements:

Specifically, numbers in titles (although they're a little overused, in my opinion) seemed to erase ambiguity for readers and raise interest in the article. For instance,“30 Ways To Make Drinking Tea More Delightful.” Yes, I know this type of headline is all over the internet - but it works. 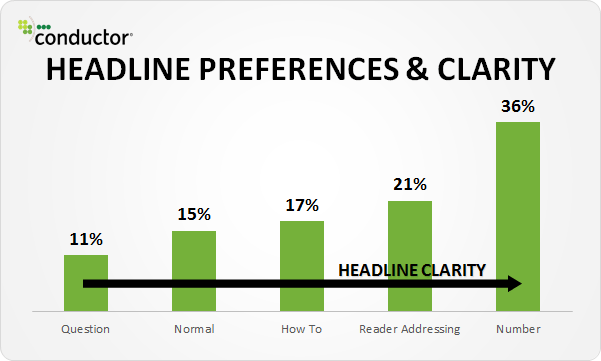 Throw in some mystery

Who doesn’t like the guy or girl you can’t quite figure it out? A bit of mystery can drive you crazy.

Barry Feldman at Unbounce believes that the perfect headlines are teasers. He interviewed a behavioral psychologist to verify his theory, and sure enough, learned that there is a phenomenon called the Information Theory Gap. This theory proposes that when there is dissonance between what we know and what we want to know, we have to close the gap and find out the answer.

So leaving some unresolved mystery in your headline could be just the cognitive play you need to get a reader to click.

Be clever or funny

Get him/her to laugh, and you’ll have ‘em in your pocket. Right where you want ‘em. The fun thing about headlines is that you can play with words and even mess around with double entendre so that your headline is more than it really is.

Trying to find examples, I just wasn't finding a ton of hilarious ones. Maybe it depends on the day. They're out there. Your challenge: be funnier!

Sometimes getting to the point is the most effective way to flirt ("You're cute. Let's have dinner" at least demands a response, rather than weaseling around making small talk for twenty minutes. Am I right?). It takes guts to be blunt. You may have to set aside your fear of whatever response they give. Blunt headlines can come across as presumptuous, but if you can prove or support whatever claim or statement you're making, it'll be a power-packed article.

Yes, it's risky to offer your undying love and affection, but it makes a statement, right? Headlines can be similarly "out there." Writer Jeff Goins calls this being “audacious.” Doesn’t everyone love a little risky behavior?

However, if you are bold, and promise something really outlandish, just make sure you deliver on it. The problem with taking risks is that they can really backfire if you don’t follow through.

Boring. We don't date boring people. Don't be boring! When Michael Kinsley was editor of The New Republic, he held a contest to find the most boring newspaper headline. It turned out that no one could beat the one he himself wrote: "Worthwhile Canadian Initiative." Ugh. A boring headline suggests a boring article. Even if your tendency is to be boring, this is your one chance to shine. So go out on a limb and be your perky, interesting self.

Unattractive. I'm not just talking about looks, but about everything that's being offered. Attractive people aren't just good-looking - they're pleasant, fun... they have good attitudes. Yes, I know that wonderful people may seem outwardly unattractive... and a lot of wonderful articles are buried under blah headlines... but your reader doesn’t know the inner content upon first glance at your article, do they? Such is the problem with first impressions - but that’s all you’ve got!

Uninteresting. Yeah, if nothing about the title relates to what interests me, I won’t click. So be interesting to the people you want to woo.

Vague. Vague and mysterious ride a thin line, but the difference is that vague leaves too much to be desired, while mysterious gives a little bit and withholds the rest. Not to pick on Jeff Goins, but one of his recent headlines left me unsatisfied. It was this: "How to Be a Champ Like Michael Phelps." I really like Jeff's writing, but this time, I passed because immediately, I thought, I am not a professional swimmer. Why do I want to be like Michael Phelps? Of course, I realize Jeff was not going to talk about learning to be an Olympic swimmer, but my next thought was be a champ in what? Life? Writing? Your exercise routine? What area of life exactly, is this blog aiming to teach or inspire me in? Be mysterious, but don't be vague. You want your readers to understand the wonders this article could hold and not be left confused.

In life, the best way to begin a relationship is by simply being yourself. Being straightforward. Not trying to trick or deceive someone into thinking that you’re somebody you’re not. When you write headlines, be true to your message and be clear about what that is. If a reader understands the type of article you’re giving him or her, they’ll be much more likely to take the bait and click. So anchor your headlines in specificity. Don’t drift. Be clear about where you’re going so readers want to come along for the ride.

If you’re true to you, you’ll attract the type of people who want what you have to offer.

And then, of course, everyone will live happily ever after.